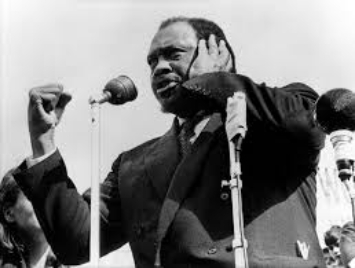 “The artist must elect to fight for freedom or for slavery. I have made my choice. I have no alternative.”

Paul Robeson was born in Princeton, N.J. in 1898, the son of a slave. He attended Rutgers University on scholarship, where he was the only black student enrolled. He won the debate team contests every year and was awarded fifteen varsity letters in four sports. He was the star of the football team and valedictorian of his class. While at Columbia University’s Law School he played professional football and basketball to help pay for his expenses. After earning his law degree he began working at a law firm, immediately experienced racism, and quickly realized that there were limitations on how far he would be able to advance in the field of law. He therefore decided not to practice law and became enormously successful internationally as a concert singer and as an actor on stage and in films. His portrayal of Shakespeare’s Othello in the U.S. and Great Britain was legendary. After starring in fifteen movies he renounced further film acting in 1942 because of the movie studios’ stereotyped portrayal of black characters common in that era.

He was especially popular in Great Britain where he lived in the 1930s and befriended the future leaders of Nigeria, (Nnamdi Azikiwe), Kenya (Jomo Kenyatta), Ghana (Kwame Nkrumah), and India (Jawaharlal Nehru). He was a very outspoken advocate for Indian independence and for the freedom of the African nations then under colonial rule. Robeson also fought for equal rights for the Māori people of New Zealand and the Aborigines of Australia.

Robeson was fluent in 14 languages and recorded approximately 300 songs. Although he sang in many languages he decided against singing opera and European classical art songs because they weren’t connected to his heritage. He was the first artist to perform entire concerts comprised of Negro Spirituals.

Robeson lived in solidarity with the working peoples of the world, and consistently visited, sang, and spoke to factory workers, miners, construction workers, and members of many other blue-collar labor industries. Robeson greatly encouraged the formation and strengthening of trade unions across the U.S.

He fought for justice in solidarity with African Americans and with the people of Africa and its diaspora. At a meeting with President Truman at the White House in 1946 he implored Truman to urge Congress to immediately enact an anti-lynching bill. Truman refused. As of June 2, 2020 lynching is still NOT a federal crime.*

Widely speaking out for independence, freedom, and equality for all people he believed that artists should use their talents, exposure, and celebrity to aid causes for justice throughout the world. In 1938 to assist victims of the Spanish Civil War he sang for the Spanish Loyalists including for wounded hospitalized soldiers and even at the battlefront to boost their morale.

He often wrote and spoke about the inhumane treatment of blacks in the South calling out the U.S. government’s actions as fascist. In 1950 the State Department canceled Robeson’s passport for eight years because he consistently criticized the U.S. government for its racial policies and spoke out for the end of colonial rule in Africa. The distribution of his recordings and films ceased. He was kept off the radio and had great difficulty finding venues for his concerts. In 1958 his passport was re-issued after eight years, when the Supreme Court ruled that the State Department could not deny citizens the right to travel because of their political beliefs or affiliations.

In 1956 he was called to appear before Congress’s House Un-American Activities Committee. Robeson invoked the Fifth Amendment, refusing to answer questions about his political affiliations. This is a fascinating audio recording from that hearing.

His son was convinced that in 1961 three weeks before The Bay of Pigs Invasion, as Robeson was preparing to meet with Fidel Castro in Cuba the C.I.A. in cooperation with Britain’s M15 poisoned his father to “neutralize” him through the secret C.I.A. mind control program, MKUltra. Subsequently, Robeson experienced hallucinations, and extreme depression and paranoia. He attempted suicide more than once. For the next two years, he was in and out of hospitals and sanitariums in Russia, East Berlin, London, and New York during which time he was simultaneously given an incredible quantity of drugs and fifty-four electro-shock treatments. The result was that he never fully recovered and spent the next fourteen years withdrawn from public life until his death in 1976.

His numerous honors include four streets being named after him in New York City, Princeton, Somerville, and New Brunswick, New Jersey. The U.S. Postal Service issued a Paul Robeson stamp. A mountain in Kazakstan bears his name. He is largely ignored in American textbooks.

This is a recording Robeson made of the song, “Joe Hill” about a union organizer and songwriter. In 1914 he was accused of murder, and executed in 1915, even though many people believed he was innocent. His songs are still an inspiration for all kinds of workers.

*A bill that would make lynching a federal crime passed the house on 2/26/20 and as of July, 2020 has not yet been passed by the senate. Here’s more info about it: