Cesare Civetta has conducted over 60 orchestras in 15 countries with sold-out performances at Lincoln Center and Madison Square Garden. His concerts have been broadcast on ABC, CBS, NBC, National Public Radio, Swedish Radio, Voice of America, and the South African Broadcasting Company.

THE ZEAL of conductor Cesare Civetta was without a doubt the factor that made this concert as successful and enjoyable as it was. Civetta’s obvious love for the music was clearly reflected in the performance of the orchestra.
SAP, Durban, South Africa

I knew immediately that I had discovered a truly great talent.
Ferruccio Tagliavini

Under Civetta the orchestra was fantastic!
Licia Albanese

National Public Radio, Swedish Radio, Russian TV, and the South African Broadcasting Company have carried his concerts live, and news of his performances has been featured on ABC, CBS and NBC TV.

At age 17 Civetta made an extensive concert tour of Poland with a youth choir. It was here that he began to sense his purpose as a musician: “Performing behind the Iron Curtain throughout Poland was one of the most spiritual experiences I’ve ever had. I saw how the power of music can inspire people and realized that the purpose of being a musician is to inspire and encourage people.”

When he conducted at the master classes of Franco Ferrara in Siena with the Bulgarian Russe Philharmonic, Ferrara stated: Clearly Civetta has total mastery of the orchestra whereby he can get the orchestra to do anything he wants.

Civetta conducted his first orchestral concert at 18, his first opera production at 19, and at 23 was invited to assist Julius Rudel, then music director of the Buffalo Philharmonic.

Rudel recalled: “I encountered the young man at Aspen and subsequently brought him to the Buffalo Philharmonic. He proved talented and promising as well as extremely enthusiastic, energetic and eager.”

Clementina Fleshler, representing the Buffalo Philharmonic Artistic Advisory Committee wrote: “Cesare Civetta has a cheerful and enthusiastic demeanor which endears him to the orchestra from the start. He received an ovation at the first rehearsal.”

Civetta’s debut in Sweden was with the Kammarensemblen, The Swedish Ensemble of New Music. The All-American program was broadcast live over Swedish radio throughout Scandinavia. He made his continental European debut in Walbrzych, Poland, where he introduced a rarely heard, late Schubert work, the ‘Grand Duo’ op. 140 orchestrated by Joachim.

RUSSIA
Mr. Civetta has toured Russia six times and has the unique distinction of being the first American to conduct a transcontinental tour of the former Soviet Union. Immediately after its demise he gave the first performance of the Stars and Stripes Forever at the Communist Party Headquarters in Yaroslavl. He has performed in 13 Russian cities including engagements at the Pushkin Opera and Ballet Theatre in Nizny Novgorod (Gorky), the Pacific Symphony in Vladivostok, the Irkutsk Symphony, and the Novosibirsk Philharmonic.

Civetta gave the Khabarovsk premieres of Mozart’s 6th Symphony and the Overture to La Clemenza di Tito, and introduced Tchaikovsky’s Marche Slave to several Russian audiences for the first time.

Such a packed hall in our city is beyond memory.
The Pacific Star, Khabarovsk

Coverage of Civetta’s historic tour of Poland, Romania and Russia during the dismantling of the Soviet Union was broadcast over Voice of America, many of the concerts were televised live, and a video documentary was produced in nine languages.

The first performance of the American conductor:

Cesare Civetta drew a sellout crowd. One of the secrets of the conductor’s artistic charm is the spirit of freshness and youth. The concert goers rewarded the mastery and charm of the world-renowned conductor with thunderous ovations.
Priamurskii News, Khabarovsk

CHINA
In China, he was the first foreign-born maestro to conduct at the Wuhan Conservatory of Music. Civetta has also given master classes and lectures in China and conducted the orchestras of the Beijing, Shanghai and Shenyang conservatories.

SOUTH AFRICA
In Durban, Civetta led the Natal Philharmonic in a series of concerts broadcast live by the South African Broadcasting Company.

Illuminating, a style quite different, an entirely changed approach. The result was Mozart of precision, lightness, and clarity, while giving tenderness and delicacy full play. Civetta conducted with a genuine sense of style.
Bernard Newman, Sunday Tribune

Sheer vitality, sweep and drive…He has a lively sense of rhythm and feeling for melodic flow, whose gestures drew some outstanding playing from all sections of the orchestra. The hall was full, and the audience appeared to enjoy listening to Mr. Civetta as much as the orchestra did playing for him. I can only say that we were indeed fortunate to find a conductor who so obviously understands Mozartian style. I found Strauss’s Tod und Verklärung especially outstanding. Civetta made the most of the climaxes, and the NPO responded with rich, sonorous playing. The overture to Die Meistersinger rounded off the concert full of splendidly shaped brazen sounds. It shows what can be done when a visiting conductor takes a shine to the musicians.”
George Nisbet, Daily News

Civetta is the producer of several radio shows including The Toscanini Legacy, for which he interviewed fifty artists who worked with Arturo Toscanini. His book The Real Toscanini: Musicians Reveal the Maestro is based on these interviews.

Maestro Civetta lives in New York City where he is the founder and conductor of The Beethoven Festival Orchestra, comprised of young virtuoso musicians of diverse ethnicities and races. It is committed to improving the accessibility to the arts by offering affordable performances in New York City and its surrounding areas by the highest caliber integrated symphony orchestra while developing multicultural audiences. 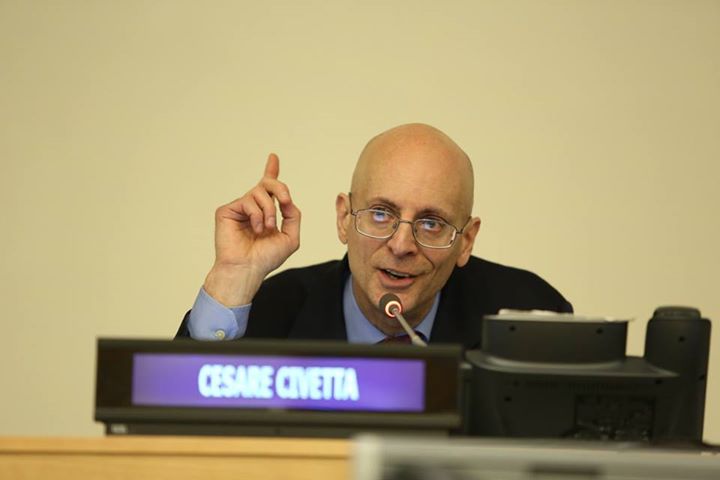